“Most observational, real-world data analyses of direct oral anticoagulants have used single data sources; in this analysis, we pooled CMS Medicare data and four U.S. Managed Care claims databases, including both commercial and Medicare Advantage lives, covering in total more than 180 million beneficiaries annually1,2 – more than half of the U.S. population,” said Steven Deitelzweig, M.D., System Department Chair of Hospital Medicine, Ochsner Medical Center, New Orleans, and one of the analysis’ primary investigators. “Being able to see patient claims from different data sets with good representation across the country may help decision making in clinical practice.”

The analysis presented at ACC includes patients who initiated apixaban, rivaroxaban or dabigatran, from Jan. 1, 2013, to Sept. 30, 2015, pooled from 5 large databases, including CMS fee-for-service Medicare data, Truven MarketScan® Commercial Claims and Encounter and Medicare Supplemental and Coordination of Benefits Database, the IMS PharMetrics Plus™ Database, the Optum Clinformatics™ Data Mart, and the Humana Research Database. After 1:1 DOAC-DOAC PSM in each database, the resulting patient records were pooled. Patients were followed for a mean of six months. Cox models were used to evaluate the rates of S/SE and of MB across DOACs within one year of therapy initiation. Patients with NVAF were included regardless of the dose of DOACs used.

Limitations of Real-World Data Analyses and of ARISTOPHANES: Real-world data have the potential to supplement randomized controlled trial data by providing additional information about how a medicine performs in routine medical practice. Real-world data analyses have several limitations.

For example, the source and type of data used may limit the generalizability of the results and of the endpoints. Observational real-world studies can only evaluate association and not causality. Due to these limitations, real-world data analyses cannot be used as stand-alone evidence to validate the efficacy and/or safety of a treatment. It is important to note that, at this time, there are no head-to-head clinical trials comparing direct oral anticoagulants.

In this analysis, although PSM was used to control for multiple confounders, there is still potential for residual bias. Claims for a filled prescription do not indicate that the medication was consumed or taken as prescribed. Also, medications filled over the counter or provided as samples are not captured in the claims data.

Analyses of real-world data allow for a broader understanding of patient outcomes associated with Eliquis outside of the clinical trial setting, as well as insight into other measures of healthcare delivery, such as hospitalization and costs.

About Eliquis
Eliquis (apixaban) is an oral selective Factor Xa inhibitor. By inhibiting Factor Xa, a key blood clotting protein, Eliquis decreases thrombin generation and blood clot formation. Eliquis is approved for multiple indications in the U.S. based on efficacy and safety data from multiple Phase 3 clinical trials. Eliquis is a prescription medicine indicated to reduce the risk of stroke and systemic embolism in patients with nonvalvular atrial fibrillation (NVAF); for the prophylaxis of deep vein thrombosis (DVT), which may lead to pulmonary embolism (PE), in patients who have undergone hip or knee replacement surgery; for the treatment of DVT and PE; and to reduce the risk of recurrent DVT and PE, following initial therapy. 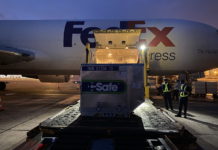 Vetter’s Contribution to Climate Protection: Corporate Sites Around the World are CO2-Neutral