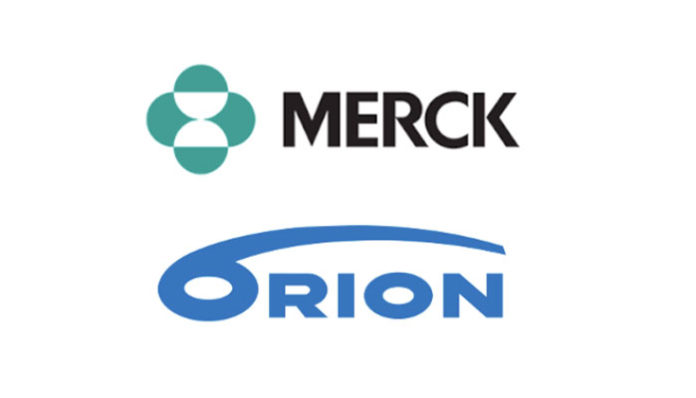 Merck, known as MSD outside the United States and Canada, and Orion Corporation are collaborating to develop and commercialize a treatment for metastatic castration-resistant prostate cancer.

Merck, known as MSD outside the United States and Canada, announced a global development and commercialization agreement with Orion Corporation, a Finnish pharmaceutical company. Through this agreement, the companies will work together to develop and commercialize ODM-208, an oral, non-steroidal inhibitor of cytochrome P450 11A1 (CYP11A1) that is currently in a Phase II clinical trial for the treatment of patients with metastatic castration-resistant prostate cancer. By inhibiting CYP11A1 enzyme activity, ODM-208 is designed to suppress the production of all steroid hormones and their precursors that may activate the androgen receptor signaling pathway.

According to a July 13, 2022 company press release, Merck is making an upfront payment to Orion of $290 million for the rights to co-develop and co-commercialize ODM-208, while Orion will be responsible for the manufacture of clinical and commercial supply of the drug. The agreement also covers other drugs in development by Orion that target CYP11A1.

“Targeting CYP11A1 provides a compelling approach to suppressing the production of steroid hormones, a key driver of prostate cancer,” said Dean Y. Li, president, Merck Research Laboratories, in the press release. “We believe ODM-208 has the potential to complement our existing program in prostate cancer and look forward to working with the team at Orion.”

The contract provides both parties with an option to convert the initial co-development and co-commercialization agreement into a global exclusive license to Merck. If this is exercised, Merck would assume full responsibility for all accrued and future development and commercialization expenses associated with the program. In this scenario, Orion would be eligible for various regulatory and sales-based milestone payments as well as double-digit tiered royalties.