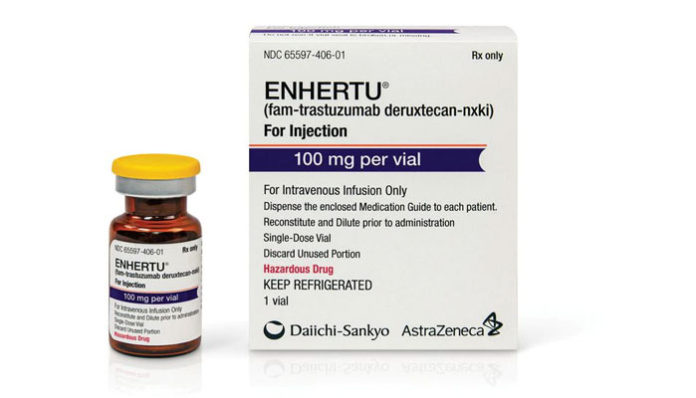 AstraZeneca (AZN.L) and Daiichi Sankyo (4568.T) on Friday secured U.S. approval that broadens the use of their therapy Enhertu, for patients with breast cancer, and paves the way for billions in sales.

This is the first-ever U.S. Food and Drug Administration (FDA) approval for a medicine specifically targeting patients with so-called HER2-low breast cancer, the agency said.

Breast cancer can express, at varying levels, a protein called HER2 that contributes to its growth and spread. HER2-low tumours are defined as those whose cells contain lower levels of the HER2 protein on their surface.

The U.S. approval is based on data from a late-stage trial involving over 550 patients with HER2-low breast cancer – most with tumours that were hormone-sensitive – whose disease had spread and who had undergone at least one round of chemotherapy.

The data, unveiled at a scientific conference in June that prompted a standing ovation from the audience, showed Enhertu prolonged survival by an additional 6.4 months in patients with hormone-sensitive tumours.

In the small group of patients with hormone-insensitive tumours, patients on Enhertu lived 6.3 months longer.

The therapy also nearly doubled the time before patients with hormone-sensitive disease began to worsen – a measure known as progression free survival (PFS).

Enhertu should carry a boxed warning – the FDA’s most serious – to highlight the the risk of a type of lung scarring and fetal toxicity, the regulator said on Friday, adding that the therapy is not recommended for pregnant women.

Enhertu originally won U.S. approval in late 2019 as a third-line treatment for the 15% of breast cancer patients with HER2-positive disease.

This fresh approval – which has come months ahead of the FDA’s expected decision date – opens up a large new patient population and the prospect of billions in additional revenue for its makers.

Enhertu generated sales of $214 million in 2021. AstraZeneca secured partial rights to the Daiichi Sankyo compound three years ago in a deal worth up to $6.9 billion.

About 287,850 new cases of female breast cancer will be diagnosed this year in the United States, the FDA estimates.

Roughly 80% to 85% of those new cases will include patients who express little or no HER2. Of those, 60% are considered as HER2-low.