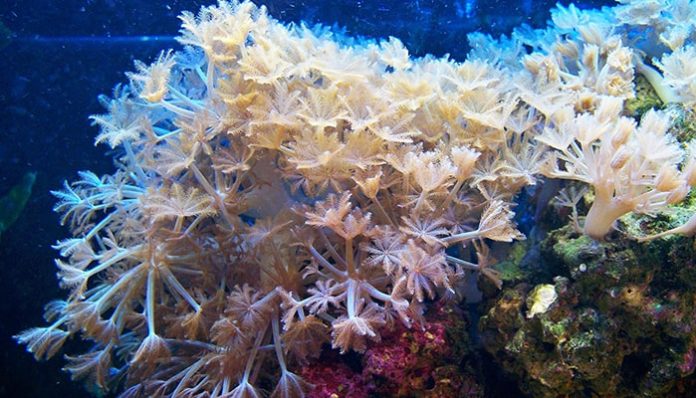 The ocean below is filled with riddles, but scientists have recently discovered one of its best-kept mysteries. For the past 25 years, researchers have been looking for the origin of a natural chemical that has shown promise in preliminary experiments for treating cancer. The elusive molecule is made by soft corals, which are flexible corals that mimic underwater plants, according to researchers at the University of Utah.

After determining the source, the researchers went on to discover the animal’s DNA code for producing the chemical. They were able to recreate the soft coral chemical in the laboratory by following those directions. This is the first time they have been able to achieve this with any drug lead on the planet, says Ph.D., professor of medicinal chemistry at the University of Utah Health, Eric Schmidt. He co-led the work alongside postdoctoral scientist and lead author Paul Scesa, Ph.D., and assistant research professor Zhenjian Lin, Ph.D.

The breakthrough opens the door to generating the substance in large enough quantities for thorough testing, which could result in a novel cancer-fighting tool one day. A second study, led by Bradley Moore, Ph.D., of the Scripps Institution of Oceanography at the University of California, San Diego, found that corals produce similar chemicals.

A Vast Universe of Possibilities

Thousands of drug-like chemicals found in soft corals could be used as anti-inflammatory medicines, antibiotics, and more. However, acquiring enough of these molecules has been a big roadblock to turning them into clinically useful medications. According to Schmidt, this new method should now allow access to these additional chemicals as well.

Corals aren’t the only animals with therapeutic promise. Snakes, spiders, and other animals considered to possess compounds with therapeutic powers abound in nature. Soft coral molecules, however, provide particular advantages for therapeutic development, as per Schmidt.

Unlike venomous compounds injected into animals, corals use their chemicals to protect themselves from predators. Soft coral compounds are easily digested because they are designed to be eaten. Likewise, medications developed from these substances should be able to be taken as pills with just a glass of water rather than through injection or other invasive methods. These molecules are more difficult to come by, but they’re also easier to create in the lab and consume as medicine, Schmidt says. For decades, these possibilities have been just out of grasp. It needed the correct knowledge and just a little luck to get to this stage.

In Search of The Source

Scesa discovered the long-sought chemical in a common soft coral species off the coast of Florida, just a mile from his brother’s residence. Marine biologists discovered an anti-cancer compound called eleutherobin in a unique coral near Australia in the 1990s. Soft corals employ the chemical to damage the cytoskeleton, a crucial framework in cells, as a defence against predators. However, laboratory tests revealed that the chemical was also a powerful cancer cell growth inhibitor.

Scientists searched for the famous “holy grail” molecule in the proportions required for therapeutic development for decades, but were unable to solve the problem without first understanding how it was generated. According to popular belief, the chemical was produced by symbiotic organisms living inside the creatures, just like other types of marine life. Scesa says, It didn’t make sense. They knew corals had to produce eleutherobin. After all, he and Schmidt reasoned that certain soft coral species lack symbiotic creatures but possess the same chemical class in their bodies. Scesa appeared destined to solve the puzzle. The ocean was his playground as a kid growing up in Florida, and he spent many hours exploring its depths and animals. He developed an interest in organic chemistry in graduate school and integrated the two pursuits to better comprehend the chemical variety of the seas.

Later, he joined natural products scientist Schmidt’s lab with the goal of locating the source of the medication lead. Scesa felt that one of his favourite coral species might hold the key, so he carried small live specimens from Florida to Utah, where the real hunt began.

The next step was to see if the genetic code of the coral contained instructions for manufacturing the chemical. Recent advancements in DNA technology have made it possible to quickly piece together the genetic code of any species. The problem was that the scientists had no idea what the chemical’s instructions should look like. Imagine looking for a certain dish in a cookbook but having no idea what most of the terms imply.

It’s like seeking an answer in the dark when you do not even know the question, Schmidt says. They solved the challenge by looking for areas of coral DNA that looked like genetic instructions for comparable substances in other species. The microbes were able to duplicate the first steps of manufacturing the possible cancer therapeutic after being programmed to match coral DNA instructions specific to the soft coral.

This revealed that eleutherobin comes from soft corals. It also revealed that the substance should be feasible to make in the lab. Their current study focuses on filling in the gaps in the compound’s recipe and discovering the most efficient technique to generate huge quantities of the potential medicine. His dream is to give these to a physician one day. He says it’s like travelling from the bed of the ocean to the bench to the bedside.