The mechanism of the antidepressant effect of Brintellix is not fully understood. It is an inhibitor of serotonin (5-HT) reuptake and that is thought to be a mechanism of its action. It is also an agonist at 5-HT1A receptors, a partial agonist at 5-HT1B receptors and an antagonist at 5-HT3, 5-HT1D and 5-HT7 receptors. The contribution of each of these activities to Brintellix’s antidepressant effect has not been established. It is considered to be the first and only compound with this combination of pharmacodynamic activity. The clinical relevance of this is unknown.

“MDD is a multifaceted disorder that encompasses emotional, physical and cognitive symptoms that may make it challenging to treat,” said Michael Thase, M.D., Professor of Psychiatry at the Perelman School of Medicine at the University of Pennsylvania. “Because patients respond to treatments differently, it is important to have additional new options available to help address the overall symptoms of major depression.”

The efficacy and safety of Brintellix were established across a comprehensive global clinical trial program, including six positive 6-8 week short-term studies – one of which was a dedicated study in the elderly that demonstrated statistically significant improvements in overall symptoms of depression. The primary efficacy measure was the mean change from baseline to endpoint in the Hamilton Depression Scale (HAMD-24) total score in two short-term studies, including the elderly study, and the Montgomery-Asberg Depression Rating Scale (MADRS) total score in the other studies. In addition, the clinical trial program included a positive 24-64 week long-term maintenance study in which Brintellix treatment resulted in a statistically significant longer time to recurrence of depressive episodes (defined as a MADRS total score ≥ 22 or as judged by the investigator) compared to placebo. Studies evaluated for safety included more than 4,700 patients aged 18 to 88 years. It is expected that Brintellix will be available to patients by year end 2013.

“We are pleased that the FDA has approved Brintellix for the treatment of MDD, a serious and complex condition,” said Charlie Baum, M.D., vice president and head, U.S. Medical and Scientific Affairs at Takeda Pharmaceuticals International. “Together with our partner Lundbeck, we have been committed to applying our collective expertise to develop new medicines that may help people with depression.”

According to The World Health Organization, fewer than half of people with depression worldwide are receiving treatment, and the burden of depression is expected to continue to rise globally. For those who do seek treatment, discontinuation is not uncommon. MDD is a heterogeneous disorder that does not consistently respond to therapy, thus it’s important for patients to work with a healthcare provider to help find a treatment plan that works for them.

“There are very few new antidepressant drugs currently in development even though so many patients still struggle with depression. We are excited about the approval of Brintellix and being able to offer a new option for patients,” said Anders Gersel Pedersen, executive vice president and head, Research and Development at Lundbeck. “This approval continues our six-decade history of innovation in research and treatments for brain disorders, and underscores the commitment of the Takeda and Lundbeck partnership to bring forward new treatments for depression.”

The mechanism of the antidepressant effect of Brintellix is not fully understood. It is an inhibitor of serotonin (5-HT) reuptake and that is thought to be a mechanism of its action. It is also an agonist at 5-HT1A receptors, a partial agonist at 5-HT1B receptors and an antagonist at 5-HT3, 5-HT1D and 5-HT7 receptors. The contribution of each of these activities to Brintellix’s antidepressant effect has not been established. It is considered to be the first and only compound with this combination of pharmacodynamic activity. The clinical relevance of this is unknown.

Brintellix was discovered by Lundbeck researchers in Copenhagen, Denmark. The clinical trial program in the U.S. was conducted jointly by Lundbeck and Takeda, and Takeda holds the new drug application for the U.S. market. Brintellix is a trademark of H. Lundbeck A/S and is used under license by Takeda Pharmaceuticals America, Inc.

The World Health Organization has issued a new Anatomical Therapeutic Chemical (ATC) code for Brintellix to be implemented in 2014.

The most commonly observed adverse events in MDD patients treated with Brintellix in 6-8 week placebo-controlled studies (incidence ≥5 percent and at least twice the rate of placebo) were nausea, constipation and vomiting. Overall, 5 to 8 percent of the patients who received Brintellix 5 to 20 mg/day in short-term trials discontinued treatment due to an adverse reaction, the most common being nausea, compared with 4 percent of placebo-treated patients in these studies. Brintellix and other antidepressants may cause serious side effects. See ISI below.

The recommended starting dose of Brintellix is 10 mg once daily without regard to meals. The dose should then be increased to 20mg/day, as tolerated, because higher doses demonstrated better treatment effects in trials conducted in the U.S. The available doses provide important flexibility for physicians to help address the variability of patient needs.

The Science of Major Depression

The monoamine-deficiency theory posits that the underlying pathophysiological basis of depression is a depletion of serotonin, norepinephrine or dopamine in the central nervous system. And while the exact cause of MDD is unknown, research suggests that there are multiple serotonin receptors that may be important in MDD and may influence many biologic and neurologic processesix. The release of bio-chemicals, such as serotonin, dopamine and norepinephrine enables impulses to be passed from one cell to another in the nervous systemix.

In September 2007, Lundbeck and Takeda Pharmaceutical Company Limited formed a strategic alliance for the exclusive co-development and co-commercialization in the U.S. and Japan of several compounds in Lundbeck’s pipeline for the treatment of mood and anxiety disorders. The companies plan to co-promote Brintellix in the U.S. for the commercial launch of the product, the Lundbeck–Takeda alliance in the U.S. will benefit from the synergy of Lundbeck’s longstanding expertise and knowledge of psychiatry and Takeda’s understanding and established presence in the very important primary care environment.

H. Lundbeck A/S (LUN.CO, LUN DC, HLUYY) is a global pharmaceutical company specialized in brain diseases. For more than 50 years, we have been at the forefront of research within neuroscience. Our development and distribution of pioneering treatments continues to make a difference to people living with brain diseases. Our key areas of focus are alcohol dependence, Alzheimer’s disease, depression/anxiety, epilepsy, Huntington’s disease, Parkinson’s disease, schizophrenia and stroke.

Our 5,800 employees in 57 countries are engaged in the entire value chain throughout research, development, production, marketing and sales, and are committed to improving the quality of life of people living with brain diseases. Our pipeline consists of several late-stage development programs and our products are available in more than 100 countries. We have research centers in China, Denmark and the United States, and production facilities in China, Denmark, France, Italy and Mexico. Lundbeck generated revenue of approximately DKK15 billion in 2012 (EUR 2 billion; USD 2.6 billion).

Located in Osaka, Japan, Takeda is a research-based global company with its main focus on pharmaceuticals. As the largest pharmaceutical company in Japan and one of the global leaders of the industry, Takeda is committed to strive towards better health for patients worldwide through leading innovation in medicine.

Cainiao and Saudia Cargo team up on China-Europe flights 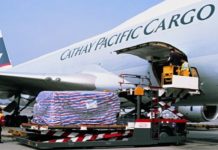